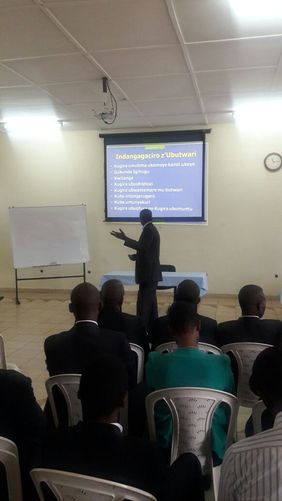 On this Tuesday 31st January 2017 ILPD conducted a public Lecture session on the Heroes of the country. This was in regard of marking the 23rd cerebration of hero’s day in Rwanda, which is cerebrated every 1st of February.

During the session Speakers put emphasis on the theme of this year which is “Ubutwari ni uguhitamo ibitubereye” (Heroism is built on our best choices).

Brig. General Bayingana Firmin who was one of the speakers encouraged ILPD community to stand on elders shoulders and follow the good examples of our heroes fighting for our interest and the dignity of the country.

The Rector of ILPD, Aimable Havugiyaremye reminded the public that heroism is not only doing your daily responsibilities but also to give sacrifice for the interest of the country (people). He also asked ILPD students and employees to acknowledge the importance of leadership in a successful story of the country.

This two hours public Lecturer session was made through a brief presentation on categories of heroes in Rwanda and the characteristics of each category, and afterwards the students and employees of ILPD were given the flow to give their comments on the topic and ask questions.

In Rwanda there are three categories of Heroes: Imanzi, Imena and Ingenzi.